Ask a Yucateca: Which beach is best?

How to Support ESL Students in the Classroom 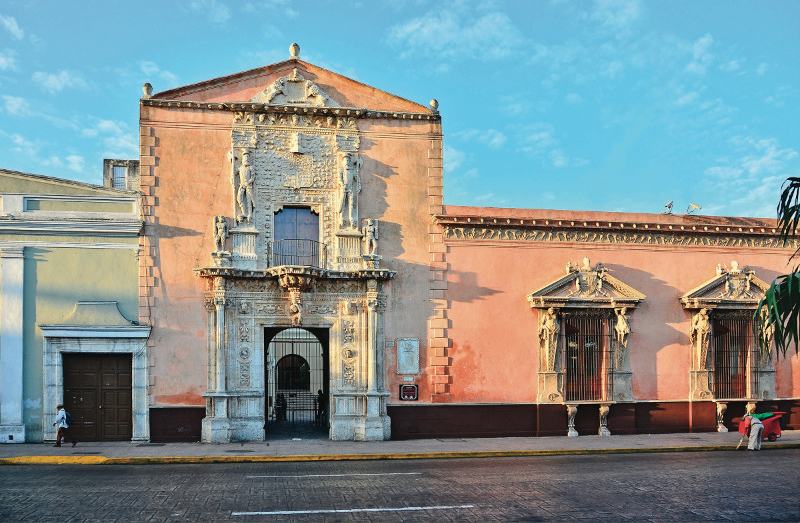 Come evenings, restaurant and bar La Fundación Mezcalería (465 Calle 56. www.facebook.com/iafundacion), in Mérida’s historic centro, is a hive of social activity, especially on weekends. It’s Friday night, just past midnight, and a line of mostly 20-30-somethings, quite a few of them queer, eagerly waits to pay the admission fee and gain entry. Having arrived a half-hour ago, I’m already inside, sucking down a fruity and chilled mezcal cocktail from a mason jar.

A cram-packed, mini-labyrinth of indoor spaces with a narrow outdoor courtyard, La Fundación isn’t a gay club per se, but the crowd is mixed. In fact, Ricardo Góngora, half of the first same-sex couple to be married in Mérida, mingles among the throng tonight. He’s pointed out by a local gay friend of a friend, Irak, who’s serving as my blind bar-crawling date for the night in this charming LGBT-friendly mecca. How friendly? Well, June sees a gay pride march and November a White Party (hosted by a US expat couple). Many foreign LGBT people have chosen to settle down or start businesses here, and, despite all the churches and Catholicism, transgender individuals are met with c’est la vie acceptance among neighbors and the community.

After finishing our drinks, and ogling/critiquing the crowd, we walk a block or so over to Casa Pompidou (Calle 58, between 53 & 55. www.facebook.com/casa.pompidou.9). Another mixed venue, which also serves as an art gallery and a live performance space, Pompidou boasts a sizeable dance floor. The all-ages crowd, making merry to a DJ’s techno set, is primarily young hipsters (there are about a dozen universities in the area), young artists, and queer professionals. Irak introduces me to a sassy friend who works on cruise lines, while my attempts to snap photos are met with enthusiastic, grinning photo bombers.

It’s well past 3 A.M. by the time we exit, sweaty from dancing, and Irak asks whether I’d like to swing by a proper “gay” bar like the none-too-subtly named Pride Disco (Anillo periférico. Tel: +52-999-101-0492. www.twitter.com/pridemérida). I’m pooped, with an early morning schedule to boot, and I take a raincheck. Besides, Saturdays are when the gay boys really party especially at Mérida’s most popular gay club, Blue Namu (Av. Colon por Reforma 21. Tel: +52-999-114-4605. www.facebook.com/blunamu).

Conveniently, Villa Verde (468 Calle No. 56. Tel: 614-500-7118.www.villaverdemérida.com), a gorgeous boutique property owned by a gay couple from Ohio, is just a minute’s stumble away from Pompidou and La Fundación. Ah Mérida, where have you been all my life?

Charming, traditional, historic, yet modern and progressive, Mérida stands apart from the rest of Mexico and its LGBT-friendly enclaves, like Guanajuato’s San Miguel de Allende and Guadalajara’s Ajijic: Yucatán is separated by both geography and its distinct Maya heritage, populace, language, and European settlers’ influences. In fact, Mérida locals will often say “let’s go to Mexico” when venturing outside the Yucatán.

I’m here during the annual Maya Culture Festival, aka Festival de la Cultura Maya, that takes place in towns throughout the region. The name is deceiving: MCF is really an anything-goes series of international performances and events and by no means is specifically tied to Maya culture. Yanni, a Greek, is 2013’s headliner, although the opening ceremony for VIPs did feature hundreds of young Mayans done up in traditional, scantily clad fashion.

For the real Mayan deal, the architecturally striking Gran Museo del Mundo Maya(529-A Calle 56. Tel: +52-999-923-6869. www.granmuseodelmundomaya.com), which opened in 2013, houses artifacts and exhibitions covering ancient and modern Maya culture alike. While the museum’s interiors are still partly empty and unfinished (a hasty, premature opening was politically motivated by an outgoing governor anxious to include it in his legacy). Gran Museo is a must-see, and you can enjoy its free outdoor light and sound show daily at 9 P.M.

There are quite a few spots to take in Mérida’s and the Yucatán’s culture, arts, and icons throughout the city, including City of Mérida Museum (Calle 65 at Calle 56. Tel: +52-999-928-3258), and MACAY (502 Calle 60. Tel: +52-999-928 3258. www.macay.org). The latter is dedicated to Yucatán’s contemporary artists including muralist/household name, Fernando Castro Pacheco, who passed away in August 2013. For English language what’s-ons, check Yucatan Today (www.yucatantoday.com).

Mérida, whose historic center represents 18th- and 19th-century colonial Spanish architecture, is dense with fantastic accommodations, many of which epitomize the superb renovation and repurposing of grand structures that shamefully went to pot over the past century. Some exposition: Mérida was home (or second home) of choice for the wealthy. Those founding families’ later generations, however, opted to move out and relocate to fresher pastures, leaving oodles of abandoned villas, haciendas, and downtown blocks in time-ravaged disrepair. A tour of downtown’s bustling market area turns up reminders of glory days, like decrepit street clocks and, bizarrely, a New York fire hydrant once gifted to the city. Today, expats are buying some of these (property taxes are next to nothing), fixing them up, and breathing new life into them–and sometimes turning them into bed and breakfasts, private rental villas, and boutique hotels.

On Sunday mornings, the Paseo becomes a pedestrian zone with great bicycling/rollerblading opportunities. The strip’s Starbucks (465 Paseo de Montejo), housed in a former mansion with an outdoor patio, is a unique, see-and-be-seen treat (fashionable gays love it, too). Just a few steps away, gay-owned Irish pub Hennessy’s (486A Paseo Montejo. Tel: +52-999-923-8993. www.hennessysirishpub.com) is also housed within a Colonial Yucatecan structure, which draws a lively crowd of friendly LGBT locals and US expats. It’s well worth visiting for a drink and new social companions. Just be sure to wear mosquito repellant when the sun sets—those suckers are merciless, and they love sangre.

It’s pretty easy to make gay and gay-friendly friends in Mérida, thanks to an accessible network of US expats and social hubs through which to connect. For instance, Michael and Robert, owners of Villa Verde, which they opened in early 2013, hail from Columbus, Ohio. They were sold their property by a gay NYC expat realtor, Keith Heitke. Heitke’s partner, David Sterling, is chef/owner of acclaimed Yucatecan cooking school, Los Dos (517 Calle 68. Tel: +52-999-928- 1116. www.los-dos.com). And this is just a couple of examples of the people you’ll meet and the connections you’ll make here.

While visiting Mérida, David Sterling’s market tasting tour is a must. During mine, I sampled cocoyol, a sort of coconut-like fruit’s pit, soaked in burnt sugar, that you suck and chew on like a gobstopper; colorful marzipan sweets fashioned from pumpkin seeds; zapote negro, more casually known as “chocolate pudding fruit” and “mashed-down excrement” due to its mushy, dark contents (that tastes like a mix of overripe avocado and a prune); and a torta de lechón al horno, one of the best pork sandwiches ever, loaded with tender suckling pig meat and crackly skin.

To get a grasp on Yucatán cuisine, I tried a wide range of dishes and venues. At La Tradición (293 Calle 60. Tel: +52-999-925-2526. www.latradicionmérida.com) I sampledcrema de chaya soup, derived from a green, mildly flavored leaf; panuchos, black bean-stuffed, refried tortillas topped with shredded meat and pickled red onion; and queso relleno, a visually unappealing but tasty concoction of yellow edam cheese (a souvenir of the Dutch, a trading partner during the 19th century) with ground meat, raisins, and veggies.

A young, local filmmaker took me off the beaten path to El Principe Tutul-Xiu (216 Calle 123. Tel: +52-999-929-7721. www.restaurantes-elprincipetutul-xiu.blogspot.com), that serves a delicious poc chuc, thin-sliced, charred pork marinated in sour orange juice with onions and avocado. It reminded me slightly of an Isaan meat salad.

One of my favorite Yucatecan meals was had in Valladolid, a smaller yet wonderfully boutique-y colonial town located halfway between Mérida and Cancún, at Hosteria del Marques (203 Calle 39. Tel: +52-985-856-2073. www.mesondelmarques.com). The guacamole was spectacular and bright, scooped with hearty, thick tortilla chips, while theescabeche, a savory, soupy stew with several types of meat, really hits the spot. The popularpavo en relleno negro, turkey in black sauce, is also well worth a taste.

My motivator to make the two-hour trek to Valladolid, however, was actually Casa de los Venados (204 Calle 40. Tel: +52-985-856-2289. www.casadelosvenados.com), a stunning, 18,000-square-foot residence that US expats John and Dorianne Venator treat as a showcase for their private 3,000-plus collection of Mexican folk and contemporary art. English tours are held daily at 10 A.M. and by appointment, while admissions collected are bestowed to a children’s eye clinic and other community causes.

While outside Mérida, I also visited Chichen Itza. It was here that my guide chatted up a souvenir vendor pal. They huddled to study and discuss a photo on the latter’s mobile phone. “What’s the deal?” I inquired. My guide explained that the vendor’s relative, while exploring the woods last night, happened across the corpse of a man who died while metamorphosing into an alligator-like creature called a Huay Chivo. “Your cousin took the photo, huh?” I asked dubiously, assuming the image been lifted from the Internet. The vendor offered up his phone, and allowed me to take a look. The creature looked like a decomposing reptile of some stripe, with an oversized head. Later, I Googled “urban legend monster Mayan” and other word combinations, but failed to find the image online. OK, so maybe it wasn’t lifted.

A few days later, the photo and a story about this Huay Chivo sighting ran in a newspaper. Not mockingly, either.

“That is one of the things that makes the Yucatán unique,” a local explained to me. “They still hold many beliefs like this, of the culture, even with all the modern world around them. It is special.”

En route back to Mérida, I stopped at Progreso Beach, located only about 30 minutes from the city, for a refreshment under a tented section of sand, before settling into even more bliss at Hacienda Xcanatun (Calle 20 S/N, Comisaría Xcanatún. Tel: +52-999-941-0273. www.xcanatun.com), located about 20 minutes outside town. This 18-suite, romantic luxury property is a former working hacienda turned tranquil haven. No children and no televisions are allowed (but yes, there’s complimentary Wi-Fi.). I visited the spa for a genuine Maya massage therapy from Doña Carolina Martínez, who puts herbs, soul, and a sixth sense into her work: she’s intuited serious illness in clients before. No such bad news for me, happily, but she explained how an energy blockage was causing a tight hamstring, and taught me a technique to loosen it.

While Hacienda Xcanatun’s restaurant is a destination in itself for high-end, Yucatecan and fusion fare (e.g. cream of poblano chile soup with Roquefort cheese), I savored my final dinner at K’u’uk (313 Calle 30, San Ramon Norte. Tel: +52-999-944-3377.www.kuukrestaurant.com), recently hailed by Food & Wine magazine as one of the world’s “100 Restaurants Worth a Pilgrimage.”

Chef Mario Espinosa takes a modernist, elBulli-esque approach to Yucatecan cuisine, highlighting native flavors and ingredients in contemporary art gallery-ready dishes. Kicking off with a thin, crispy rectangle fashioned from potato starch and decorated with dots of Chaya-infused custard, the meal was indeed worth a trip to Mérida alone. Sublime cocktails incorporating small-batch Real Minero Mezcal, and a cutely packaged to-go macaron when leaving, more than warrant a return.

Celebrate Canada Day with poutine at the Mérida English Library

In García Ginerés, generations of women made Flores Café a success story

The imposing Toltec capital of Tula and its mighty stone warriors

2,290 new COVID cases this week, most cases mild but deaths inch up

4 tips to consider before building on Yucatán’s Gulf coast